Ralf Leenen is a classical mandolinist and violinist that continues the tradition of great mandolin players in Europe. He is playing with great technique the Callace repertoire but not only that. Vivaldi and other classical composers have a place at Ralf Leenen concerts. 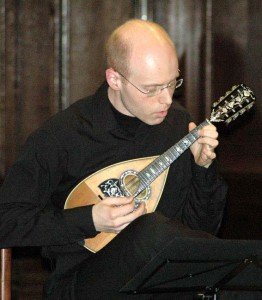 Ralf Leenen (°Antwerpen, 1974) started playing mandolin at the age of six, at the academy “Cantilene” where he was a pupil of Joe Van Dunnegem.  He became first mandolin player in the Royal Estudiantina “La Napolitaine” at twelve years old and two years later he became the orchestra’s leading soloist and concertmaster. Under guidance of Henri Gamblin he continued studying classical Italian mandolin technique in the tradition of Silvio Ranieri.

Ralf studied violin at the Brussels Royal Conservatory with Clemens Quatacker and later on with Igor en Valery Oistrakh. As second instrument he studied classical guitar with Albert Sunderman. In 1997 he graduated as “Master in Music”.

Since 1999 he succeeded Henri Gamblin as director and leader of the Royal Estudiantina “La Napolitaine”. As a multitalented musician Ralf regularly performs on both the mandolin and violin and also gives solo recitals with piano accompaniment.

Together with Barry Pratt he is author of the book “The Embergher Mandolin”.