The Melbourne Mandolin Orchestra is an orchestra with great past and a bright future!

History of the Melbourne Mandolin Orchestra

Peter Evans & Josef Ruecker, a mandolin player & classical guitarist respectively, collaborated to form the Melbourne Mandolin Orchestra in 1967, attracting to its ranks players of all ages who had come to Australia from Italy, Malta, Netherlands, Germany, as well as Australian-born musicians.

The new orchestra performed its first concert in Beaumaris in 1968 and was commissioned to make its first commercial recording for W&G Records in 1969. The orchestra built up an impressive infrastructure in order to perpetuate the orchestra long after that initial impetus. This included a training orchestra where prospective players were trained in performance and orchestral techniques. A committee of management and a music committee ensured good management and the ability to take on new projects.

The Melbourne Mandolin Orchestra rehearsed for most of its history at the same venue, the Sandy Beach Recreation Centre in Sandringham, which was originally owned and operated by Bruce Morey who was for many years a highly enthusiastic and valued player with the MMO! His son, Stephen Morey, became a virtuoso on mandolin and performed internationally with the trio “i mandolini” along with Jill Johnson and Joan Harris, who are both still active and highly valued players with the MMO!

In 2013 the orchestra moved from the Sandy Beach Recreation Centre to make its new home in the German “Tivoli Club” at 291 Dandenong Rd, Windsor because this venue was much more central to where most current players live and the facilities this venue offers were superior to those in Sandy Beach. Nevertheless, after 45 years in Sandringham, the move was an emotional “wrench” for many players!

Australian composers, George Tibbets, Eric Austin Phillips and Robert Schulz were commissioned to write works for the orchestra. The young MMO was a strong social group enjoying walking & camping trips for its members. These grew into annual week long music camps located on farms at St. Arnaud and Mansfield. The word of these annual camps spread and soon players from New South Wales, Canberra & West Australia were joining the music making. Between 1977 – 1980, the venue of these music camps was moved to the Bendigo College of Advanced Education to accommodate the larger numbers of interested players. All levels of playing were catered for and private lessons were given. The large orchestra often numbering more than 100 players was the focus of the week which culminated in a grand concert in the Bendigo Town Hall. 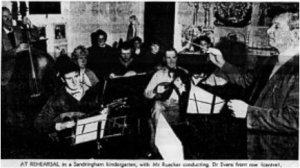 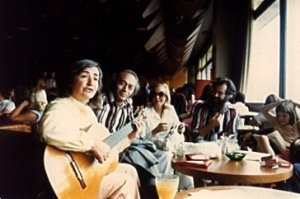 This enthusiasm and good organization resulted in the formation of the Federation of Australasian Mandolin Ensembles (FAME) in 1979, which drew together all of the mandolin ensembles in Australia and New Zealand. FAME now has responsibility for the sesquiennial (every 18 months) Music Festivals which attract players from Europe, American continent, New Zealand & Japan. In 1990 it was Victorian mandolin players from the MMO, Concordia Mandolin and Guitar Ensemble & the smaller Geelong Mandolin Ensemble who collectively organized for the first International Mandolin Festival ever to have been held in Australia (at International House in Parkville). This required the organization of 11 concerts in Melbourne and regional Victoria, quite an undertaking indeed!

Bringing overseas mandolin orchestras to Australia is another essential part of the MMO activities. These contacts provide a vital exchange of ideas about repertoire, technique and training of new players. Keio University Mandolin Orchestra came from Japan in1975, the Deutsches Zupforchester came from Germany in 1977, and the Mie Mandolino & Mieken Sankyoku Kyokai (Koto Ensemble) came from Japan in1989. The MMO has also supported these tours of overseas artists including the Danish Mandolin Duo in 1988, the Neuenhain Mandolin Orchestra in 1989, the Badische Zupforchester in1991, and the Nagoya Mandolin Orchestra in 1996.

The MMO is not entirely adverse to touring and participating in festivals itself, and has performed in the Melbourne International Arts Festival, the Adelaide Fringe Festival, the Castlemaine Arts Festival, and the Port Fairy Music Festival in the past few years as well as bringing many concerts to smaller communities within regional Victoria.

The MMO has also collaborated with many other musical groups including Sadko Balalaika Ochestra and the Armenian Choir of Melbourne to conduct joint concerts, much to the delight of everyone!

Overseas tours by the MMO

Melbourne players formed the backbone of the Australian Mandolin orchestra which toured Germany in 1980. In 1991 the MMO toured Japan for a week. In 1993 the MMO played for a week in Spain at the festival for Plucked Strings in Logrono, then competed successfully at the inaugural Mandolin Orchestra Competition in Eupen, Belgium winning prizes for Best orchestra, Best original composition, and Best soloist. It then played several more concerts in France, Belgium & Germany. In 1996 it returned to perform in concerts in Switzerland, Germany, Holland & Belgium.

Plans are underway for the orchestra to tour in Europe in 2018, the year of its 50th anniversary!