What is a Mandolin Chord?

A chord is a combination of three (or more) notes.

According to the above definition, the minimum requirement for a sound to be named “chord”, is to include three notes that are played simultaneously. This definition is valid for any instrument, from the mandolin to the violin and the piano.

Focusing on the mandolin, to play a chord you need to use at least three different but adjacent string pairs, as you can not play two notes on the same string (at least the last time I checked, ha).

Now, to play a mandolin chord you may have to use all four fingers of the left hand and this is a 4-finger or “difficult” chord. Here is an example:

You may also get lucky and use less fingers and this becomes an “easy” chord. Here is an example of an easy C major mandolin chord (1st inversion):

But are there any exceptions or variations to this defintion? Of course! Here you are:

Chords with more than three notes

Why limit yourself to three notes? Depending on the instrument you are playing, chords can have more notes, in fact you can include in a chord as many notes as the strings of the instrument.

You can argue that two notes do not constitute a chord but just an interval. And you may be right!

On the other hand, two notes played simultaneously definitely imply a chord (but which?), so two-note chords, or dyads have been used extensively in music.

These notes in a chord need not actually be played together: arpeggios (broken chords) may, for many practical and theoretical purposes, constitute chords.

Take the violin for example. Playing violin chords is tricky as due to the bow, a violinist can only play simultaneously only up to 2 strings, i.e. a chord can have only two notes.

So, a violinist instead can play three or more notes in sequence, and we call this arpeggio.

In fact all instruments support this technique, so we have mandolin arpeggios, guitar arpeggios etc.

The below two finger mandolin chords are the reason why playing chords on the mandolin doesn’t have to be difficult or complex. 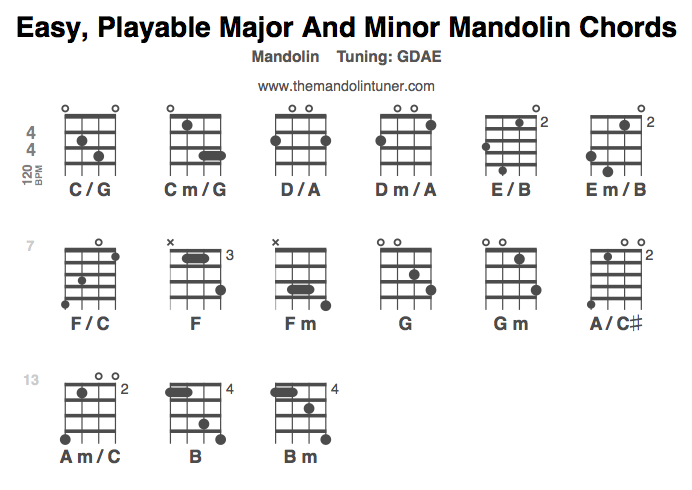 Although there are many variants of chords that when used by mandolin masters and especially jazz musicians can give great depth and rich sound to the tiny instrument we love (the mandolin), there are also easy chords to be played on the mandolin, and you should start with those.

I have created with a lot of patience and effort a mandolin chords reference database. You can access this reference by using the sidebar.

In the reference, chords are presented on mandolin fret-boards, fingered for your convenience. Here is how to read the diagrams: 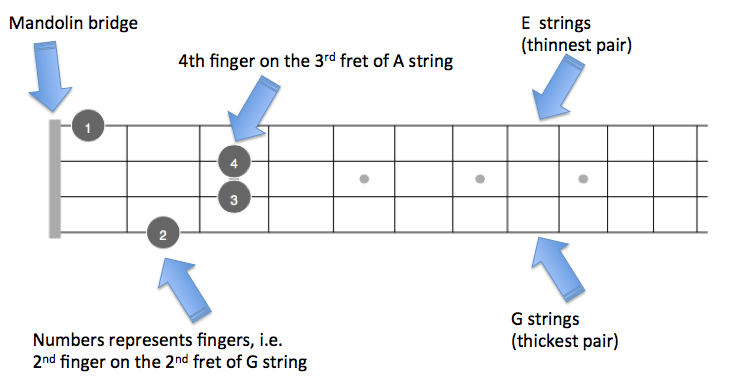 For every root note you select from the sidebar, the following chord types have been included:

If all this was not enough, I created detailed articles for selected chords to get you started.

How to play G Major chords with a mandolin

How to play G minor chords with guitar or mandolin