La Orden de la Terraza” (which in english means more or less “The Order of Vase”) was the first Military Order of Knighthood, known in Spain. To this order belonged the kings of Navarra, their descendants and the more distinguished aristocracy in the Court.

According to the legend, King García III, “the One From Nájera” (1.035-1.054), went for hunting with his hawk in the morning, in the vicinity of Nájera. Suddenly a partridge appeared, and being followed by the hawk, flew into a hidden cave. When García walked into the cave, he found there an altar, lighted up by a candle. On the altar was an image of The Blessed Virgin with Her Son, and at her feet laid hawk and partridge in perfect harmony, behind a “terraza” (an older kind of vase) with white lilies.

Deeply impressed with this vision, the King established the Knighthood Order of The Vase “La Orden de la Terraza” in order to commemorate his encounter with the image of the Blessed Virgin in the cave, where later was build the Monastery of Santa María La Real of Nájera, which became the family vault of the kings of Navarra.

The plucked-string orchestra “La Orden de la Terraza” established in the city of Nájera (La Rioja-Spain) in 1974, with the goal to show to the world the sonore qualities of music, when performed with plucked-string instruments.

The Orchestra has a large repertoire, covering from Middle Age up to Contemporary music, including masterpieces of baroque, gallant, classical, and romantic styles, and paying special attention to Spanish Music of all times.

Over these many years of existence the Orchestra has performed a large amount ofconcerts in many places around Spain, taking part in important domestic and international plectrum festivals and contests, such as Segorbe and Vila-Real (Castellón), “Bienal de música de plectro” (Madrid),Manzanares (Ciudad Real), La Rioja, Santander and Los Corrales de Buelna (Cantabria), El Campello (Alicante) or Valladolid. It takes an active part along with the Government of La Rioja in the Cultural Program “ The Wine & The Five Senses”. “La Orden de La Terraza” is founder member of the Spanish Guitar and Plucked Instruments Federation (FEGIP).

Over its first years the orchestra travelled all around the region of La Rioja, offering a large amount of concerts, very well received by the public wherever they performed. Five of its members took part in the 9th & 10th edition of the “National Plucked-Instrument Quintets Contest” taking place in Logroño (Spain). The full Orchestra (in those times made up only by ten musicians) -in this year becaming an international contest- in 1.978.

Starting again in 1.985 after a long interval, the Orchestra bounced back with new impulse under the guidance of Ramón Hervías Baeza (at the moment honorary director). A new generation of young musicians, then pupils of Hervías, joined up at this time “La Orden De La Terraza”. In 2003 took over the conduction of the Orchestra Carlos Blanco Ruiz, teacher of Upper Degree on Guitar in Logroño’s Music Conservatory, as well as member of the Orchestra since 1994.

In may, 1.992 “La Orden de la Terraza” took part in the “International Festival of Music” taking place in the city of Kobe (Japan). Over july and august, 1.994 the group went on a tour around Europe, performing in several places in France, Luxembourg, Germany, Hungary, Austria, and Switzerland. In august, 1.995 toured again Europe, this time performing in France, Italy, and Hungary.

In april, 1999 the Orchestra celebrated its 25th anniversary, in which took part the japanese composer & mandolin player Yasuo Kuwahara, the Spanish Duet Chamorro-Muñoz, and the Duet Muñoz-Pavón from Luxembourg. 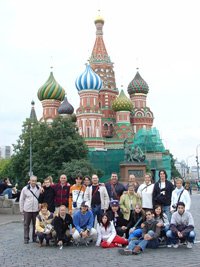 In august, 2001 it toured a new series of performances around Austria and Hungary, recording its second disc, “HUNGRÍA”, this time at live, which has been wide broadcasted by Radio 2 Clásica of RNE (Spanish national radiobroadcasting company). Once again in Spain, the Orchestra performed, along with the japanese “Ensemble philmusica” in the premiere in  Haro (La Rioja) of the piece “In the fence in Haro”, dedicated by the composer, Yasuo Kuwahara to this city.

It has taken part several times in the Composition contest “Ciudad de Logroño”, celebrated within the framework of La Rioja International Plectrum Music Festival, in which the Orchestra premiered the opuses: “La Senda De Los Elefantes” (2002), from Eduardo Maestre -which was awarded-; “Náxara” (2003) from Pedro Chamorro -which won an accésit-; “Udawálawe” (2004) from the German Composer Oliver Kälberer, and “Música en DO” (2006) from Carlos himself -both walked off with second prizes-; all pieces are dedicated to “La Orden De La Terraza”.

Other foreigner composers, such as Ariadna Amador, from Cuba, have also composed pieces specially for this Orchestra.

In september, 2004, performed a new series of concerts in the Russian Siberian cities of Tomsk and Novosibirsk.
Several members of the Orchestra have work along with the La Rioja Symphonic Orchestra and with the Symphonic Orchestra Of The Community Of Madrid, as well as with the National Spanish Ballet. They are also members of the prestigious Orchestras “Roberto Grandío” from Madrid y “Nacional Ensamble” from Alcázar de San Juan (Ciudad Real) both conducted by the well-known composer and bandurria player Pedro Chamorro. With this last orchestra they have had the privilege of playing along with the prestigious saxophonist Pedro Ithurralde.

In 2007 the Orchestra made a collaboration with the argentinian guitarist and composer Jorge Cardoso, performing “Concierto del Vino” (“The Concert of the Wine”), for voice, guitar and string orchestra, along with the Soprano Guadalupe Larzábal. On June, 2008, they came together again to offer this same Concert.

In october, 2009, performed two concerts in the “X Giornate Nazionali sul Mandolino e la Musica a plettro” in Italy.
Nowadays the Orchestra is made up of musicians with very different ages. They play the instruments of the family of Spanish bandurria (e.g. bandurrias soprano, contralto, tenor, baríton, bass), guitar, bass guitar. Sometimes they are even accompanied by light percussion instruments.