Invitation to Concert at Peiraus, Greece

Invitation to Concert at Peiraus, Greece 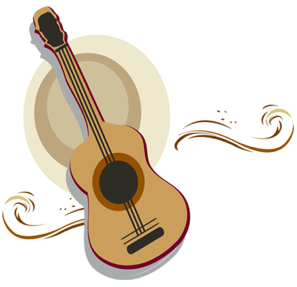 The work Hindmost Vespers (2012) by Mihalis Keffalas will be presented (in a premiere), and I will be playing the mandolin part, together with:

Admission is free.
I will be glad to see you there! 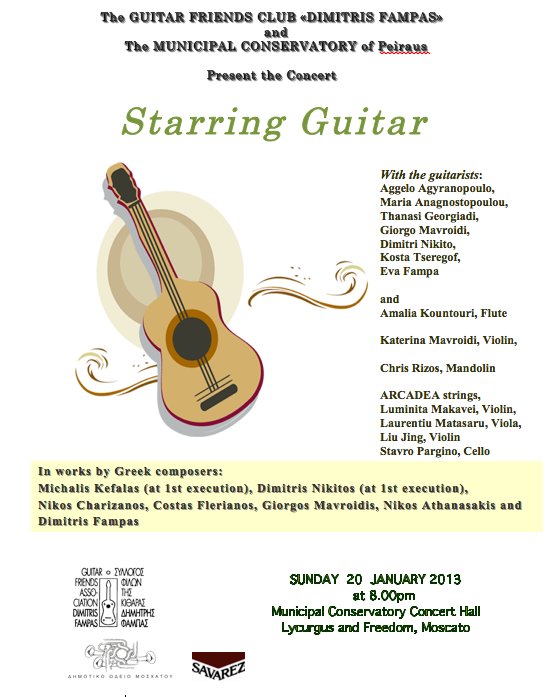 The Guitar Friends Association Dimitris Fampas, a non profit cultural association, was founded in 1999, under the initiative of the Professor – Guitarist Eva Fampas, to honor the memory of the great virtuoso guitarist Dimitri Fampas, who was a major figure in the music scene and established the guitar school in our country. One of the most brilliant guitarists of his time, he gave numerous concerts all around the world, a gifted professor who created some of the most famous greek guitarists, and a very talented composer who enriched the guitar repertoire with wonderful and original music.

Aims of the Association are :
-To honor the memory of this great artist-composer and much loved teacher:
by providing support for guitar performance, teaching, composing and research in Greece and throughout the world, especially to young and talented guitarists.
by providing opportunities to guitarists around the world to know , study and perform the music of Dimitri Fampas.
by contributing in the development of the Greek culture and it’s diffusion abroad.
-To honor members of the music community through such activities as the awarding Of the Association’s Honorary Membership and Laureateship.

Activities of the Association are:
The gathering , editing , recording or any other way of reproduction of Dimitri Fampas’ work. The organization of concerts, artistic events, lectures, seminars, competitions, the support of musicians and musicologists who interpret his music and write about his work. The organization of every cultural event that helps in the promotion of our aims. The collaboration with other associations, Foundations etc. private or public in Greece and abroad for the same reason.

Dr. Michalis Kefalas is a doctor of musical composition (Goldsmiths University of London). He was born in Athens in 1966. He is son of Petros Keffalas and Calliope Karamanlis, from Oinousses, Chios. He studied music at Greek conservatories (Diploma in composition, Th. Antoniou) and at the British Open University (Dip. Mus., BA). In 1994 he established the ‘Alypios’ Music School in Korydallos (Piraeus). In 1996 he was appointed music teacher in primary schools. From 1999 he specialized in composition at the Universities of York (MA, D. Blake) and Goldsmiths London (PhD, R. Redgate) on an five-year educational leave (scholarship) granted by the Greek Ministry of Education. He has been awarded a scholarship by the I.D. Pateras Panchiakon Foundation and a grant from Avra Shipmanagement S.A. of N. Lemos. He won first prize in the 2000 competition Young Composers of Next Generation in the Athens Concert Hall, second prize in his final examinations in composition, second prize (song with orchestral accompaniment) and third prize (chamber music) in the 2008 International Composition Competition of Volos, as well as 2 prizes and a special mention in the 2009 International Music Prizes for Composition (Municipal Conservatories of Western Salonica, National Academy of Music). Works of his were selected for performance at the 2nd Alfeo Gigli International Festival of Composition in Italy, for the final examinations of 2009 Brussels Conservatoire in Belgium and at the 18th International Review of Composers in Serbia. Additionally, the Board of the National Academy of Music (USA) honored him with the title and grade of Honorary Fellow of the National Academy of Music. His work includes more than 70 compositions of music for children, song cycles, chamber music, incidental music for theatrical plays and orchestral music. His research interests range from science fiction opera and the harmony of the spheres to the music education of people with special needs and of immigrants. He has authored A Handbook for Entrance Examinations to Music Departments of Universities, The Microcosm of Manos Hadjidakis, Works 2000-2004 and Rembetiko in Schools. He is now artistic director of Municipal Conservatory of Hymittos (Athens).

I’m Chris, a mandolin lover from Greece, trained in Music, Mathematics and IT who makes a living on technology but enjoys life through music and arts. Welcome to my adventures!
Page load link