Hamilton de Holanda(10-string mandolin) transgressor of the mandolin adding 2 extra strings. André Vasconcellos (double bass) a reference point in the Brazilian bass and Thiago Serrinha (percussion) born and raised in the Rio`s Favelas, has running in his blood and name, the tradition of ‘’Jongo da Serrinha“. The album repertoire is universal, communicative and 100% Brazilian. It`s full of Hamilton`s new compositions and other composers like Chico Buarque, João Bosco and Baden Powell. 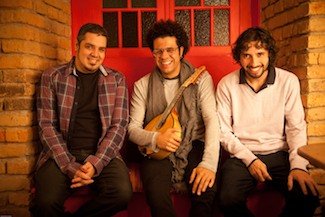 Virtuosic, brilliant and unique are some of the adjectives to describe this musician who thrills audiences around the world, building a career of countless awards. With superb technique and absolute Brazilianness, either on stage or in the studio, Hamilton takes the breath away with interpretations and performances full of emotion. His versatility allows him to perform with property in any formation.

His latest work, HAMILTON DE HOLANDA TRIO, has a universal nature and an immediate identification with any audience in the world without affecting its 100% essentially Brazilian nature. It is formed by Hamilton de Holanda (10-string mandolin), Thiago Serrinha (percussion) and André Vasconcellos (double bass). Such formation recreates the best of two worlds: the acoustic intimacy and virtuosic density that Hamilton normally emanates in his solo concerts plus the characteristic pressure and joy featured in Hamilton de Holanda Quintet’s work.

André Vasconcellos comes from a family with musical background. He is a reference point in Brazilian bass music and has played with Hamilton for a long time. This friendship has built a symbiosis – they know and trust each other’s note paths. Thiago da Serrinha, percussionist, born and raised in the Rio`s Favelas, has the tradition of ‘’Jongo da Serrinha“- a cultural manifestation associated with African culture in Brazil with a powerful influence on the construction of the genre known today as “Samba” – running in his blood and name.

Hamilton, aged 37 and 32 years of professional career, started playing at 5.  Since then, he has been regarded as a prodigy. At the age of 6, he was entitled to a performance on “Fantastico’’, the most popular Brazilian TV evening show. Nowadays, around the world, he is a transgressor of the mandolin and creator of the technique of playing the 10-string mandolin, freeing the emblematic Brazilian instrument legacy from some of its influences and genres as well as featuring a new artistic language and rejuvenating the image of the Bandolim, also known as Mandolin.

Hamilton de Holanda`s signature is identified in his solos. His way of playing, the increased number of strings and the delicacy of his picking combined with the speed solos and improvisations inspired a new generation and a new sound. Whether it is jazz, samba, rock, pop, lundu or Choro, little does it matter. Hamilton`s search is for simplicity, music focused on beauty and spontaneity, not necessarily new. In his view, there is a new world full of possibilities and his guiding principle is “Modern is Tradition”. What is important is not the past or the future, but the intersection between them both, the exact point at which they blend, right here, right now, the present moment, the “is” – here and now.

The repertoire covers Hamilton’s new compositions and some of the 24 “Caprices” he composed, inspired by Paganini’s Caprices, to serve as a method of studying the 10-string mandolin. In addition, there are songs by other composers and great Brazilian musicians like Chico Buarque, João Bosco and Baden Powell. Each show is different because improvisation and interaction with the audience dictate the direction we go in. Fasten your seatbelts and get ready with love and care to get loose. 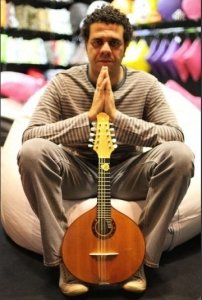 Hamilton de Holanda is a Brazilian bandolinist known for his mixture of choro and contemporary jazz, and for his instrumental virtuosity.

Born in Rio de Janeiro he moved to Brasilia with his family as a boy. He started playing the mandolin at 5 and appeared at his first performance at six. With his brother Fernando César he formed the group Dois de Ouro and throughout his career he has collaborated with many other significant artists such as Yamandu Costa, Mike Marshall and Joel Nascimento. He has received several Latin Grammys. He has taught at the Raphael Rabello Choro academy. He plays a custom made 10 string Bandolim.