I discovered Eva Holbrook in May 2013 just after I stumbled upon her excellent Youtube Video, Tuscany. I was really impressed by Eva, and her creative use of the mandolin in Tuscany, so I started looking around for videos of hers and I was really happy to see her in a girls group, SHEL, with such a fresh sound! I loved it.

I have been a fan since, and I am planning to record Tuscany soon with a mandolin orchestra. This should be fun. Anyway, till then I am happy listening to her recordings and discs with Shel!

Copied from her Official Site (see external links below):

The Holbrook sisters grew up in a musical household and first appeared on the stage backing their singer-songwriter father, Andrew Holbrook. In 2005, the girls collaborated to form SHEL and now play and write all of their own music. Their new EP, “ When the Dragon Came Down,” was co-produced by SHEL and six-time Grammy award-winner, Brent Maher. The band has attracted the attention of such major media outlets as NPR’s “eTown Live,” and ABC.com; toured nationwide playing fairs and festivals including South by Southwest, International Folk Alliance, Lilith Fair, Four Corners Folk Festival and Cornerstone; and had one of their songs featured in Glade’s Scented Oil Candles national TV ad campaign.

Eva (Mandolin, Electric Mandolin, Cello) I’ve just turned 23, and I’m very excited about it. The majority of my musical influences created some of their most innovative work at 23.If you’re interested in my life, I spend most days composing and writing, singing and playing mandolin and cello, as well as dabbling in recording. When the owls are out I write stories and make hats and dresses and imagine that I’m on the brink of my destiny, just like the Ugly Duckling. Every interaction and accomplishment is bringing me one day closer to swanhood.
I do have an undeniable longing to become a farmer someday. The smell and feel of good earth seems to restore my humanity. I have a goat. She’s small, pigmy in fact. Lot’s of spots. She’s preparation for the Jersey Cow I have my heart set on.
I live with my family and that is all very well because I’m best friends with my sisters. If I wasn’t I would live in a large well furnished Tee pee with my dog and learn how to fish and hunt. As fun as that would be, I think playing music with my sisters is at least twice as fun. If it weren’t, I wouldn’t have been doing so since I was 11.
My middle name is Ellen, but I’ve lied about it to so many people that by now half my acquaintances believe it’s Winston. Sometimes my conscience stands on his head until I do the right thing, like tell the truth about my middle name.
Well, I think I’ve covered all the important things to mention in a biography. Thank you for reading… 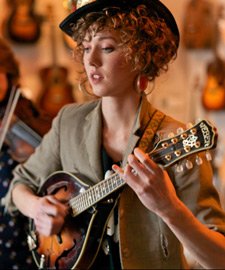 Eva Holbrook, the mandolinist in the group SHEL, seems to use various mandolins in the performances. Eva plays both acoustic and electric mandolin, and is a featured Weber artist (see external links below). She often uses a Vintage A Weber mandolin that produces a lovely sound.

If you want to attend a  performance from Shel, I recommend you check with their official site for tour dates and events (see external links below).