The Ensemble Gabriele Leone owes its name to a famous 18th century mandolin virtuoso. It is made up of enthusiast musicians who improved with Masters such as Ugo Orlandi, Marga Wilden- Hüsgen, James Tyler, Paul O’Dette and others. Founded in 1991, the Ensemble won the first prize of chamber music and the Prize for the best interpretation of a piece from Fescobaldi at the First International Contest of Ferrara, Italy, in 1994.

(Copied From official site, check External Links below)
Ensemble Gabriele Leone is an ensemble of mandolins and guitars. This association was founded in 1991 in order to find, play and spread original mandolin music written from the 18th century to contemporary music and also including traditional music, especially from South America.

The composition of the group varies from 3 to 8 musicians featuring at least one mandolin, it includes guitars and sometimes (for ancient music) baroque violin, cembalo, theorbo (a bass lute), and other instruments playing chamber music with mandolin.

Mandolin is well-known for Neapolitan serenata and for Vivaldi’s concerti, but people in Europe usually ignore that mandolin is also part of American bluegrass music, as well as Brazilian music or Venezuelan music. for instance Mandolin is very often being played in choro music, since the 1950’s when the virtuoso Jacob do Bandolim was active. As an ensemble, we try to present in our concerts these different types of original mandolin repertories, classical as well as traditional.

From 1979 to 1990, we were soloists of a plucked strings orchestra, a traditional form of amateur musicians group learning all together with a teacher who generally conducts the orchestra. Those soloists were also playing chamber music and finally separated from the mother orchestra to follow their goal : to travel through Europe and present the discoveries that Didier Le Roux (brother of our guitar player Guy) and myself had made concerning the mandolin history in the French National Library in Paris and in other European libraries. We play the music we have found on copies or original instruments repaired by luthiers in France, in Spain, in Germany and in Italy, according to their capabilities and interests on the different instruments we wanted to play.

We also give some music lectures. Few people take lessons with our group, but on demand, we can organise summer courses for instance on ancient music. It happened that we arrived and lent a dozen of instruments to the students, testing the different sounds and the related literature during the week.

We have a record which has been recorded, and that we want now to produce, and we are proposing it to various labels. If one is interested, please contact us through our web site : www.ensemble-gabriele-leone.org 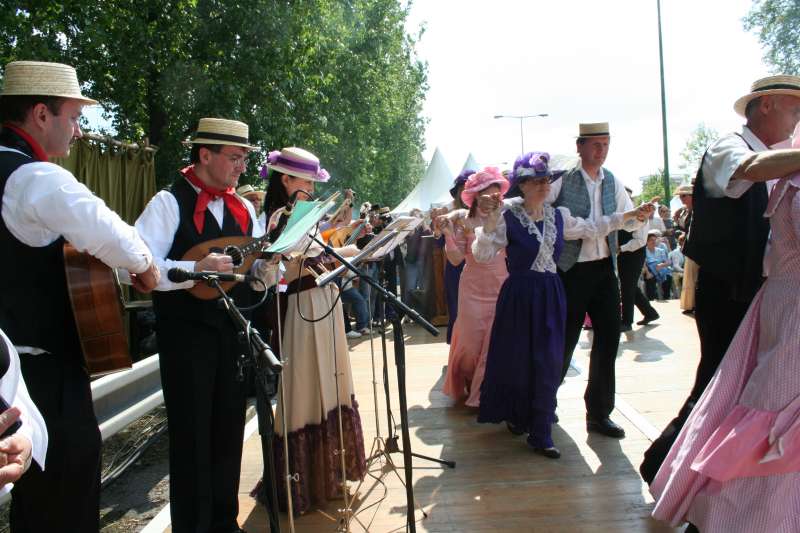 The Ensemble Gabriele Leone, which owes its name to a famous 18th century mandolin virtuoso, is a group whose size varies according to circumstances. Its aim is to promote the music written for mandolin. It is made up of enthusiast musicians who improved with Masters such as Ugo Orlandi, Marga Wilden-Hüsgen, James Tyler, Paul O’Dette and others. Didier Le Roux and Jean-Paul Bazin have played together since 1979, and have conducted in-depth research on 18th century mandolin. They also publish articles in the specialized magazine “Le Plectre” . Éric Depret, who joined The Ensemble in 1982, won a first prize at the Musical School of Argenteuil, France. As a quintet, The Ensemble with Jaona Girard as the mandolinist, won the first prize of chamber music and the Frescobaldi Prize at the International Contest of Ferrara, Italy, in 1994.

The distinctive characteristic of the Ensemble is that it its broad repertory (more than 100 pieces) of music written for mandolin during the 18th century (Barbella, Cauciello, Hoffmann, Leone, Roeser, Scarlatti…). We play these pieces on genuine antique instruments (about 20 concerts). In these concerts, we also play with musicians who are specialists in ancient instruments (harpsichord, viola, theorbo, …). We recorded a selection of these pieces on our CD « Mandolins over five centuries ».

Our group also ordered many pieces from French composers (M. Bosc, V. Bouchot, A. Brochot, B. Rossie, A. de Valera …) and we created in France some pieces written in Germany or Italy for mandolin orchestra.

We are also interested in romantic music (Calace, Munier) and contemporary music (Ambrosius, Angulo, Behrend, Gal, Mandonico, Sprongl…) written specifically for mandolin orchestra. Our repertory also includes theater music (Goldoni, Molière …) and some transcriptions from master pieces (Haydn, Mozart, Ravel, Telemann, Vivaldi…), done by the members of the group accorcding to their preference, and that fit well to the sound of plucked strings. We have recorded an anthology of this repertory in its previous CD, “Quinte et Sens de la Mandoline”.

An other aspect of our group is that we teach the history of mandolin, its techniques and repertory, during training course in France, Spain or Italy.

The Ensemble has played more than 100 times in many festivals, in France, Italy, Spain, Switzerland and Germany. Some of its main activities are a participation to the Roman Church Festival of Berry (1995, 2004, 2005) , the theater music for “La bonne mère ” from Goldoni (1993, live on Radio France Culture) and for “Le Sicilien ou l’Amour Peintre” from Molière/Lully (Val d’Oise in France, march 1998), the sound track of the short movie “People in Searching” from the Chinese director Wong Yan Kwai (june 1998),the Festival de l’Île-de-France in Villarceaux in 1998, the Mandolin Festival of Württemberg (Germany, April 1999), a concert at the World Economic Forum of Cologny (Switzerland, june 1999), a series of concerts in Britanny (august 1999) including one in the « Lundis Musicaux de Camaret » in (1999) where the Ensemble played in an other concert in 2003, a concert with the “Randonnées Musicales en Ferrand” (2001). We also participated (concert and training course) in the third International Festival of Varazze (Italy, December 1999), in a mandolin training course at Épinal (may 2000) and in the fifth Week of Ancient Music of Gijon in Espagne in 2002 (concert and training course) and also in Spain, we participated (concert and contest) in the International Festival of Riojà (1992, 1993 and 2003).