I discovered Avi Avital mandolin performances in June 2013, and my first reaction was, “what, do they really play mandolin in Israel?”. Yes I did not know then, and it was my fault. As it happens in the age of YouTube and Vimeo, I stumbled upon a track from Avi Avital Deutche Grammophone Bach album on YouTube and immediately decided to try to learn more about him.

Researching the Internet for more info, I was initially  impressed by how young Avi Avital is, and also by his strange mandolin that he uses as his main instrument (more on that below). I was skeptical at the beginning, but quickly changed my mind, especially when I read about his vision and deep commitment to “building a fresh legacy for the mandolin through virtuosic performance and exciting new repertoire” and after listening to his brilliant performance for his recording of Avner Dorman’s Mandolin Concerto with Andrew Cyr and the Metropolis Ensemble, that allowed him to receive a Grammy nomination in the category “Best Instrumental Soloist” . This is what I am listening now, when writing this post!

I have to admit, I am now one of his big fans, I have purchased all his recordings and I am  looking forward to meeting him and attending one of his concerts or recitals.

Avi Avital is internationally regarded for his performances at venues including Carnegie Hall and Lincoln Center in New York, Berlin Philharmonic Hall, KKL Luzern, Forbidden City Concert Hall in Beijing and Wigmore Hall in London. He has appeared as soloist with the Israeli Philharmonic Orchestra, I Pomeriggi Musicali di Milano, San Francisco Chamber Orchestra and Berliner Symphoniker under the batons of Mstislav Rostropovich, Sir Simon Rattle and Philippe Entremont, among others. Avital has collaborated extensively with artists such as clarinetist Giora Feidman, soprano Dawn Upshaw, and trumpeter and composer Frank London. He has also been featured at the Tanglewood, Luzern, Spoleto, and Ravenna summer music festivals. 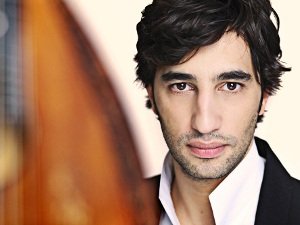 Avi Avital is the first mandolin player to receive a Grammy nomination in the category “Best Instrumental Soloist” for his recording of Avner Dorman’s Mandolin Concerto with Andrew Cyr and the Metropolis Ensemble. He has won numerous competitions and awards, including Germany’s ECHO Prize for his 2008 recording with the David Orlowsky Trio and the Aviv Competition, the preeminent national competition for Israeli soloists. Avital has released numerous recordings in the disparate genres of klezmer, baroque, and new classical music. Avi Avital recently signed an exclusive agreement with Deutsche Grammophon who will release a Bach album in June, 2012.

In 2012 Avital joins the Silk Road Project workshop to collaborate on a new work by composer David Bruce. He premieres a commission by Ariel Blumenthal with violinist Ittai Shapira in memory of journalist Daniel Pearl. Also slated is a live baroque concert with interactive video arts project in collaboration with Euroarts highlighting Venetian music of the 17th century.

Avi Avital is a graduate of the Jerusalem Music Academy and the Conservatorio Cesare Pollini of Padova, Italy. 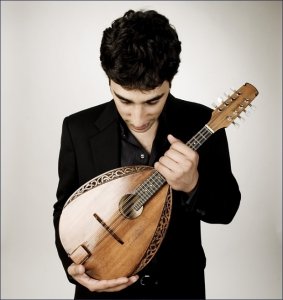 The (main) mandolin that Avi Avital uses is as impressive as his brilliant performances. This is a mandolin built by Arik Kerman (1998), Israel;

Apparently, whoever knows the Beer-Sheva school of mandolin must have heard of the Israeli type of modern mandolins.

A mandolin maker called Arik Kerman who lives in Tel-Aviv, invented a formula to make the mandolin in a way for which it has a much of a round and sweet sound, and can easily produce a very soft sound other than the metallic Neapolitan one. A link to the official site of Arik Kerman is located at the end of this page (external links).

If you want to attend a concert or performance from Avi Avital, I recommend you check with his official site for dates and events (see external links below). Here is a link to Avi Avital 2013 concert dates.