Avi Avital is the first mandolin player to receive a Grammy nomination in the category “Best Instrumental Soloist” for his recording of Avner Dorman’s Mandolin Concerto with Andrew Cyr and the Metropolis Ensemble. This composition was commissioned by Avi Avital, and the World Premiere was at December 18-19, 2006, Rostov State Theater Orchestra, Andrea Gottfried, conductor, Avi Avital, mandolin, Sala Barozzi in Milan and Teatro Verdi, Pisa.

“One of my favorite things as a composer is to discover and explore new instruments. When Avi Avital approached me to write a concerto for him, my acquaintance with the mandolin was fairly limited. I had used it in chamber pieces only twice before, and did not know most of the repertoire for the instrument. As I got to know the instrument better, I discovered its diverse sonic and expressive possibilities.

The concerto’s main conflicts are between sound and silence and between motion and stasis. One of the things that inspired me to deal with these opposites is the Mandolin’s most basic technique – the tremolo, which is the rapid repetition of notes. The tremolo embodies both motion and stasis. The rapid movement provides momentum, while the pitches stay the same.  The concerto can be divided into three main sections that are played attacca:

1. A slow meditative movement with occasional dynamic outbursts. The tremolo and silences accumulate energy which is released in fast kinetic outbursts. The main motives of the piece are introduced, all of which are based on the minor and major second.

2. A fast dance like movement that accumulates energy leading to a culmination at its end. The tremolo is slowed down becoming a relentless repetition in the bass – like a heartbeat. The fast movement is constructed much like a Baroque Concerto and a Concerto Grosso. The solo and tutti alternate frequently and in many instances instruments from the orchestra join the Mandolin as additional soloists.

I would like to thank Avi Avital for his dedication and commitment throughout the process of creating this piece; for many hours of experimenting with unusual techniques; for introducing me to the Mandolin’s vast repertoire, including Baroque Mandolin, Russian folk music, Bluegrass, Indian music, Brazilian Jazz and Avant-Garde; and for performing the piece with depth and virtuosity.”

TheMandolin Tuner has included Avi Avital in the Hall of Fame.

To read more about Avi Avital, check the: 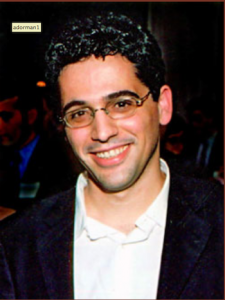 Avner Dorman holds a Doctorate in Music Composition from the Juilliard School where he studied as a C.V. Starr fellow with John Corigliano. He completed his Master’s degree at Tel Aviv University (where he majored in music, musicology, and physics) studying with former Soviet composer Josef Bardanashvili.

At age 25, Avner Dorman became the youngest composer to ever win Israel’s prestigious Prime-Minister’s award. Since, he has been awarded the “ACUM” prize from the Israeli performing rights society for his Ellef Symphony, Ma’ariv, the second largest newspaper in Israel, named Dorman “Composer of the Year” for 2002, and the performance of his song cycle Boaz received the Israeli Cultural Ministry Prize for best performance of Israeli music the same year.

Dorman’s Variations Without a Theme, premiered by Zubin Mehta and the Israel Philharmonic Orchestra in November 2003, won the 2004 Best Composition of the Year award from ACUM. This piece led to a commission from Zubin Mehta, PercaDu, and the Israel Philharmonic Orchestra for Spices, Perfumes, Toxins!, a concerto for percussion duo and orchestra that became one of the most performed compositions of the decade.

In 2006 Naxos Records released an album dedicated to Avner Dorman’s piano works with Eliran Avni at the piano to critical acclaim. Ken Smith of the Gramophone Magazine wrote that “Dorman is not just a fresh, young voice, worth following. He’s also a composer whose music, particularly as rendered here by pianist Eliran Avni (for whom several of these works were written), fits well on the instrument and resonates strongly with the musical tradition at large.”

In 2010 Naxos Records release an album dedicated to Avner Dorman’s chamber orchestra concerti. Avi Avital’s performance of Dorman’s Mandolin Concerto on this recording was nominated for a 2010 Grammy Award in the category of Best Instrumental Soloist Performance with Orchestra.

Dorman is an Israel Cultural Excellence Foundation (IcExcellence) chosen artist since 2008, which is one of Israel’s highest recognition for excellence in the arts.
He is currently a professor of theory and composition at the Sunderman Conservatory of Music at Gettysburg College. On May 29, 2013 it was announced that Dorman was appointed to be the next music director of CityMusic_Cleveland chamber orchestra.

There are numerous resources to read more about Avner Dorman. I recommend: