Probably the most enjoyable part of my journey as a luthier has been of recent years. It all started with attempts at building timber resonator cones. I was looking for warmer tone.

The “National” style of resonator was the timber cone I first tried. This was done by joining long triangular strips on a V cone mould. Although there was an immediate improvement in tone there was a big loss in volume especially in the bass or bottom end. My guess was that the increased weight and stiffness of the timber as opposed to aluminium was the problem.

Breaking Through a Drought of Failure

It turns out that I am by no means the first individual to try timber cones and, like all the others, my attempts to engineer a resolution never fully satisfied my ear. The cone design that worked the best was a pressed composite carbon fibre timber piece with a very thin flexible carbon fibre rim which allowed the freedom for bass response. …Looking back to this point I can remember feeling almost defeated with no further options to test……I had a rubbish bin that was filling regularly with failed experiments. To keep my spirits up I would tell myself that I had succeeded in discovering what does not work.

The pictures here are one example of a soundboard or timber resonator that was kept for its originality not for the sound it made. 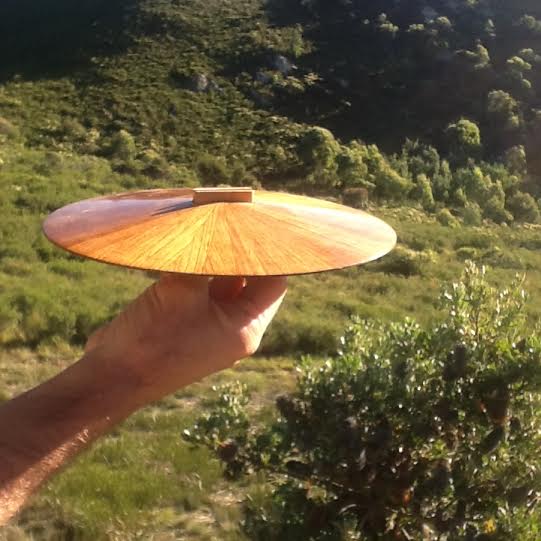 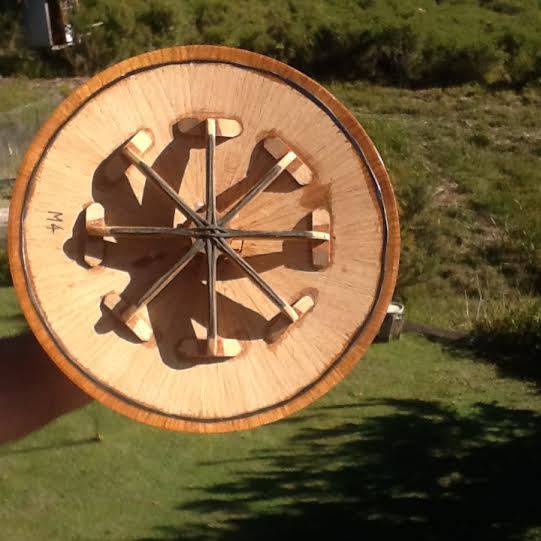 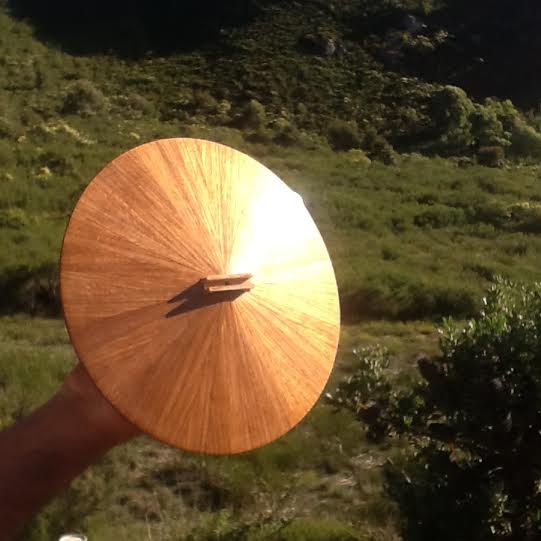 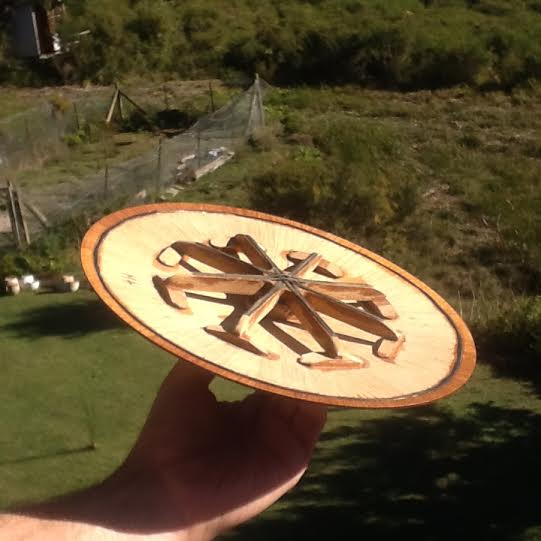 It was a request from a customer friend that changed everything:

Steve’s comment was that he would love to have one of my resonators in his guitar if I did not have to cover up such beautiful timber work with carbon fibre. The work I did for him has laid the foundations for all the instruments that I currently build. There is no question that Steve’s intuitive request was the catalyst that sent my work in the right direction. I am eternally grateful.

All of the divergent soundboards in my instruments now have a lattice brace pressed into them. They resonate for the same reason that a bowed saw does. I think this an important breakthrough as soundboards are currently “awakened” by the force of the strings. I try to explain what I have done by explaining this following impossible scenario:

Should all the glue that is holding the divergent soundboard suddenly fail then all of the component pieces would literally explode off it…maybe that is exaggerating but it explains how the soundboard is holding tension which may explain why it seems to literally liberate sound.

I have found the tone of my soundboard seems to work best with instruments that have pairs of strings like the mandolin family or 12 string guitars. The reason for this is probably because the divergent sound board has a clear or uncomplicated tone. Constant testing for new possibilities is always part of my agenda.

Having an optimistic attitude towards testing design theories is a good thing as it helps get through some of the tedious work needed to do the tests, but, it is important not to let it “cloud” or leave a “rose coloured tint” on the results.

I have concluded that as a designer most if not all of my theories are at best “half baked”. So, when tests results do not match theory it means that I am wrong or there are variables that I have not considered. I am happy with this because when I break through to deeper understanding new possibilities arise. The following story is good example of this.

About ten years back I built a 12-string guitar. They are great instruments for luthiers to build as the force of 12 strings is considerable and will expose any design flaws. All the 12 strings I had played to that point had overly heavy necks and therefore bad balance to play. I resolved to build one with a light neck. To do this I used light machine heads and instead of a heavy adjustable truss rod a piece of carbon fibre was anchored on the back of the neck. One of the properties of carbon fibre is that has no elasticity so I was left scratching my head as the neck of this instrument slowly but surely warped until the instrument was totally unplayable. The fret board was obviously compressing as I had used an Australian hard wood which was not hard enough. Fortunately I had just come on a supply of ebony and I was able to replace the fret board. However a new problem arose.The neck did not move…it remained perfectly flat and as most players know necks need a slight amount of relief to make an instrument playable. To resolve this I had to remove the fret wire and sand relief into the fret board.

From this I learnt 2 big lessons: Firstly any beam or object under load has the force of tension and compression on it. Occasionally I forget this principal when designing instruments resulting in rebuild or rubbish bin.

Secondly ebony for my purposes has no measurable compression along its grain. We have in Tasmania a very rare and beautiful timber called Dorrel …It is hard and heavy like ebony but unlike ebony it does not chip easily when it is cut. I will be testing it out soon on some instruments and if it works well I will be producing instruments that are made exclusively from Australian and Tasmanian timbers.

In the next blog I would like to continue this discussion on instrument necks and if any questions arise from piece please ask and I will help if I can. 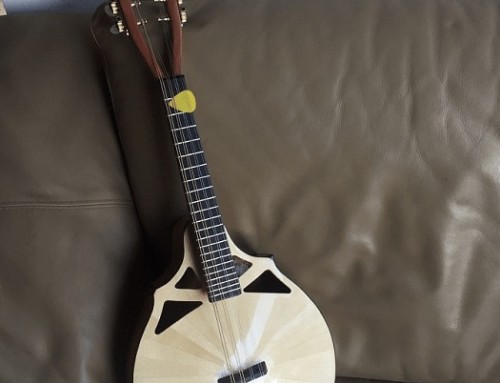 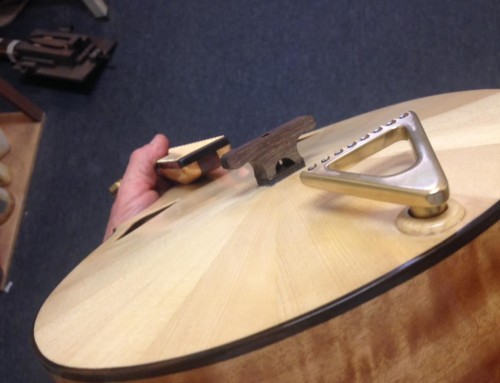 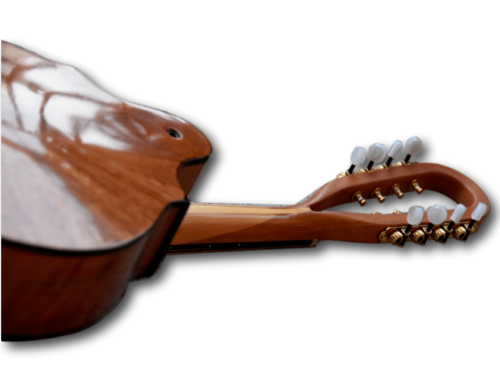 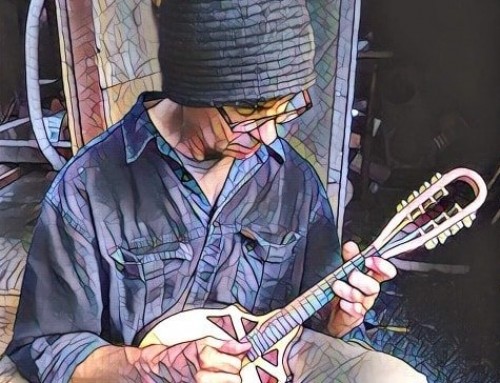 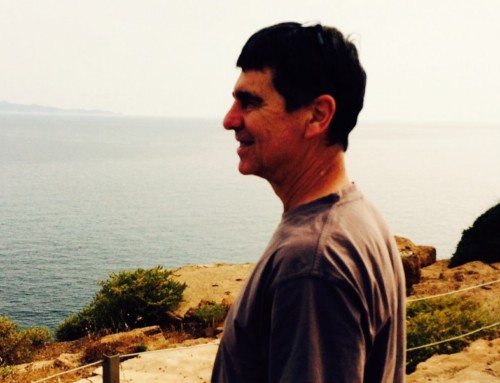